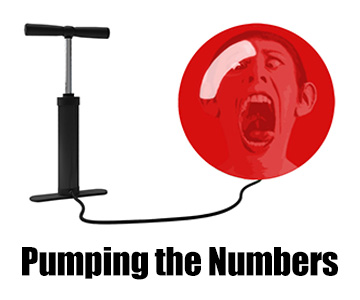 I recently encountered a question on Quora asking why gun control advocates always include suicides in their claims about gun violence. It referenced an article written by Daniel Brown for Business Insider entitled “These are the 10 US states with the weakest gun laws in 2017”

The main reason for adding other firearm-related deaths is that it inflates the numbers, increasing their propaganda value. There’s nothing wrong with propaganda. It’s a time-honored tool that is freely employed by both sides of the gun debate.

A very close runner-up reason is that counting only murders paints a very different picture.

Some dictionaries say violence can be an act against oneself as well as another person. However, savvy gun-control message strategists know that the average person who hears or reads the word “violence” and thinks only of actions against another person. Add the word “gun” and they have a real action phrase that ignores the many other weapons used to kill another person.

Homicides and suicides are both violent acts but homicides are what we worry about in terms of a threat to the public at large.

No one is dismissing the tragedy of suicide. Suicide happens all too frequently but it is a separate problem with different causes. For more on suicide, see “This violence is real and we’re ignoring it”

If we focus on what most people consider violence there is a huge shift in the rankings.

Adding to the mystery of Mr. Brown’s picks is the fact that his chosen states don’t really stand out for having uniquely weak gun laws.

The Giffords Law Center gave failing grades to 24 states and a grade of D to five more. All of the states that received a F have similar laws regarding background checks, gun shows, purchasing and possessing firearms, including military-style rifles and high-capacity magazines. The only substantive variations come from differences in handgun carry laws.

Kentucky and Louisiana like most states in the U.S., permit open carry of a handgun but require a permit to carry a concealed handgun.

All of the other states in Mr. Brown’s list are what is known as “constitutional carry” states. This means they don’t require a state-issued permit to carry a handgun either openly or concealed. There are currently twelve states that are effectively constitutional carry states and Arkansas simply needs some legislative tweaks to its laws to become the thirteenth.

When it comes to gun control advocates’ most cherished ideals, all of the states are disappointments. None of them, like almost all of the other 14 F-graded states, have any special restrictions on military-style rifles or magazine capacity; none of them require universal background checks, none of them require permits to purchase a gun or to be a gun owner and none of them have any type of firearm registration. Many of them do have things like stand-your-ground laws and castle-doctrine laws. They might as well be the Old West as portrayed by Hollywood.

In part two, a look at how these states stack up in terms of true gun violence.