The federal appeals court for the 9th Judicial District has reversed a ruling from the U.S. District Court of Hawaii and said that the state’s laws on open carry are unconstitutional.

As the accompanying graphic shows, the 9th District’s rulings affect just seven western states along with Alaska and Hawaii. Seven of those nine states already allow open carry of a handgun without a permit so the ruling has no impact on them. 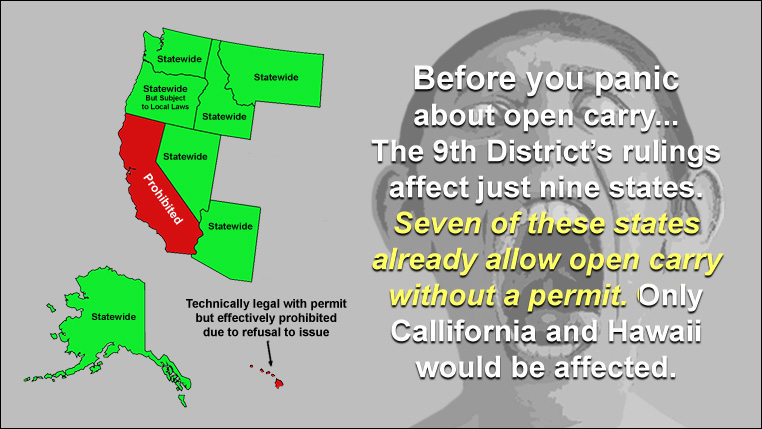 Ignore the media hysteria; the end of the world hasn’t happened — yet.
Both California and Hawaii have permitting laws in place, but in the state of Hawaii and 14 California counties, it’s virtually impossible to get one. In fact, the state of Hawaii recently announced it would not issue permits at all except for security guards whose employment requires them to be armed. The court found that Hawaii was infringing on the Second Amendments provision for bearing arms.

Without any hype on either side, this ruling expands on the 2008 Supreme Court decision in District of Columbia v. Heller in which the majority ruled that the Second Amendment protects an individual right to keep and bear arms. The decision in Young v. State of Hawaii, et. al. addresses the right to bear arms for the purpose of self-defense.

Allowing for the regulation of concealed carry, the court reasoned that the only method left protected by the Second Amendment was open carry.

Open carry without a permit is already legal in the majority of U.S. states. 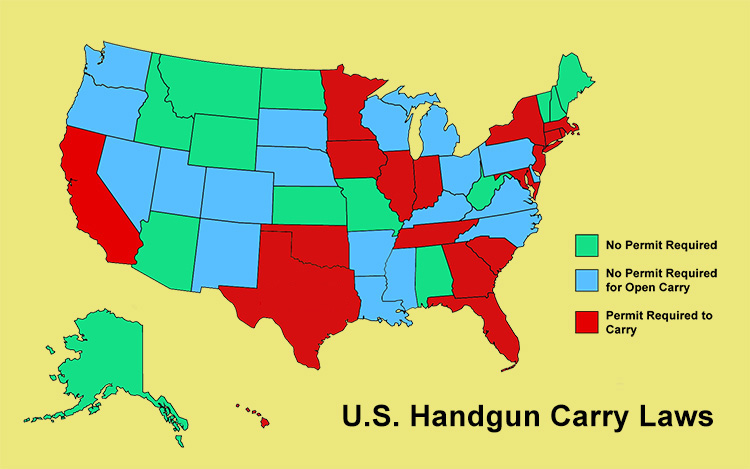 The Majority of U.S. states already allow carrying of a handgun without a permit. Thirteen states allow a handgun to be carried openly or concealed, the others permit open carry. All states have restrictions on who may carry and where a handgun may be carried. Chart © 2018 Bill Cawthon
There is little doubt that Hawaii will petition for an en banc review of the ruling and that no matter how that is decided, it is likely to make it to the Supreme Court. The state’s only other choice would seem to be compliance with the ruling and allowing the open carry of handguns.

California has the option of becoming a shall-issue state with a uniform statewide standard for issuance of carry permits. Currently, permits are reasonably easy to obtain in the majority of California counties but nearly impossible to get in others, all subject to the whim of the county sheriff.

While nothing is set in stone, the case is unlikely to reach the Supreme Court before the Senate almost certainly votes to confirm Brent Kavanaugh to replace retiring Justice Anthony Kennedy. Even if the Court agrees to fast-track the case without waiting for a review, it wouldn’t have a chance of being heard until the court’s next session, which begins in October and the GOP Senate majority is almost guaranteed to schedule a vote the minute Mitch McConnell is sure he has 50 votes (Vice President Pence would cast the deciding vote in a tie and he is certain to approve).

Since Justices Samuel Alito and Clarence Roberts and Chief Justice John Thomas were in the majority in the Heller case and new Justices Neil Gorsuch and (presumably) Kavaugh have been strongly pro-gun, it may be that unlicensed open carry could become the law of the land. This would affect not only states like California and Hawaii, but generally pro-gun states such as Florida, Georgia, Oklahoma, South Carolina and Texas, as well.

I have read the entire majority opinion by Judge Diarmid O’Scannlain in Young v. Hawaii as well as the dissent by Judge Richard Clifton. There are interesting arguments on both sides but the majority opinion does seem to more in line with prior decisions, especially Heller.

What makes the decision stand out is that it comes from the 9th District which has traditionally been the most liberal of the 12 U.S. districts.

While this may be disconcerting to some, the truth is that most states with open carry have had it for many years. Vermont has had permit-free carry since it became a state. With some exceptions for certain parts of the country, such as more rural or wilderness areas, open carry is rare. Those who carry a handgun for self-defense generally prefer to carry concealed. Moreover, a record 16.3 million concealed carry licenses have been issued and the dire predictions of blood running in the streets hasn’t come to pass, even in states with a fairly high percentage of permittees. Indeed, the homicide rate in 2014 was the lowest since the late 1950s. The higher rates reported in 2015 and 2016 were still below the running average over the past 36 years.

In the meantime, people should refrain from doomsday predictions or premature celebrations. For the time being, nothing is going to change, even in Hawaii. The court did not issue an injunction or otherwise impose any requirement for the state to immediately comply with its ruling and state authorities are simply evaluating their options. There will be calls to sign petitions (and send money) for one side or the other. Don’t; they all can be safely ignored. If you actually read the opinions, you will find that the courts generally don’t factor them in their rulings.