An article appearing in the Washington Post quotes Rick Sanders, the chairman of the board of supervisors for Story County, Iowa.

“I believe that a rising tide lifts all boats,” said Sanders. “But we haven’t seen that impact on lower-skill and blue-collar workers yet. I’m hoping it’s just a matter of time.”

Mr. Sanders, a Republican, would be more realistic if he believed in unicorns. A belief in trickle-down economics is much like a belief in unicorns except that one is more likely to encounter a unicorn.

Republicans have believed in that rising tide for more than three decades and they still haven’t produced any proof that it works. Trickle-down economics not only has been dismissed by most economists, but has been disproven by decades of real-world experience.

The GOP has been spouting the cliched “rising tide” theme for more than 30 years. Since the advent of Reaganomics, the party has assured us that “trickle-down” economics would work.

It was a lie then and it’s a lie now.

The typical increases in wages have already been erased by rising prices after just seven months this year.

The highest marginal income tax rate when Reagan took office was 70%; the capital gains tax rate was 25% and the maximum corporate tax rate was 50%. Compare that to the rates following the GOP tax cut enacted after Trump’s election. The new rates are respectively 47%, 58% and 20% lower than when Reagan was sworn in the first time.

It appears that while the boats of the wealthiest are rising as though they could defy gravity, the rest of the fleet is taking on water. 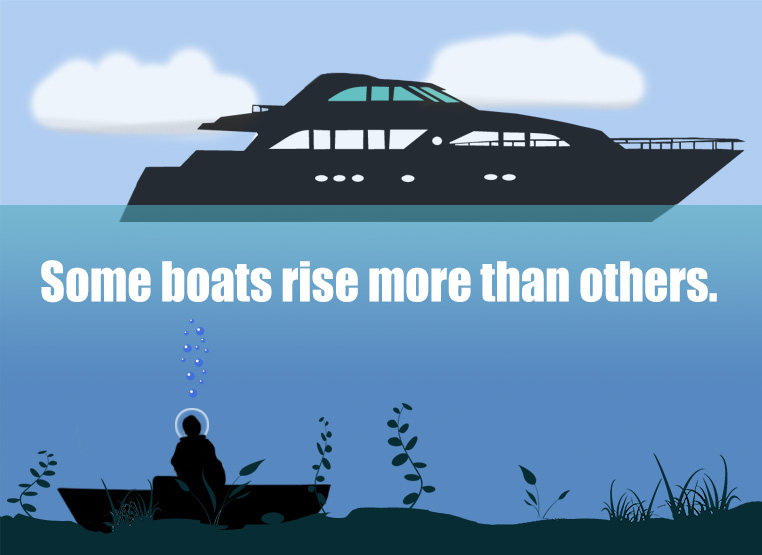 In spite of this there is still a widespread belief that this time, tax cuts will drive wages higher. This belief extends to the wage-earners themselves.

There is real likelihood of punitive retribution on the part of employers and the reality that wages would not go up proportionately for all employees. It’s already common for employers to cut hours to avoid having to class workers as full time and entitled to benefits; new hires often make more than previously hired workers in the same position.

The true impact on consumer prices of these increases is largely unknown. But consider this: The top U.S. companies spent enough on stock buybacks and boosting dividends in 2017 to give every American hourly worker a one-time $9,700 bonus. The top American companies had enough cash and cash equivalents held overseas to fund a similar bonus of nearly $27,400 for those hourly workers.

There does appear to be at least some room for better wages without huge increases in inflation.

Yet the Democratic Party seems to have missed the point. Worse, it seems to continue missing the point.

The Democrats lost the 2016 election. Not Hillary Clinton — the Democratic Party. Expected to take the White House and control the Senate, the Democrats were said to even have a shot at flipping the house. Instead, Trump won the popular vote in 60% of the states; the GOP maintained control of the Senate and the Democrats managed to flip just a handful of seats in the House.

Choose whichever bunch of sour grapes suits your fancy. The fact remains that, for whatever reason, Hillary Clinton lost the election due to a tiny percentage of the total vote in three states, all of which went for Obama in 2008 and 2012. The three state total was less than 80,000 votes.

Why such a bloodbath? Mostly because the Democrats focused on the wrong things. Forgive me for choosing practical politics over sensitivity but the party pushed too many issues that simply were not a major factor in people’s everyday lives.

In the meantime, Donald Trump was laying down a load of political manure that rivaled the pre-climate change polar ice cap, making promises about jobs and bring jobs back to America. In other words, the hot buttons for most American workers. He capitalized on the resentment of offshoring and outsourcing despite the fact the President really has little control over either.

It’s not enough for Democrats to simply say they favor raising wages. Campaigners like Alexandria Ocasio-Cortez are already drawing fire even from sympathetic sources for some of their platform planks. The Democrats need to provide some kind of plan, some sellable road map, to to better incomes for more people. Washington can really only impact the minimum wage and real efforts to drive increases even in that have been lackluster.

When Gary Cohn, Trump’s economic advisor, met with the Wall Street Journal’s CEO council for a panel discussion in November 2017, the moderator asked the business leaders if the then-proposed tax cuts would make them willing to invest more in their companies. Why hasn’t the Democratic Party made their responses a rallying call and kept it in the forefront of the American people. After all, almost none of the CEOs said they would use the tax windfall to make investments in their workforce, their facilities or their products.

Yes, there is lots of support for the Affordable Care Act, but where’s the Affordable Life Act? Where is Franklin Roosevelt’s famous statement about the National Industrial Recovery Act?

“In my Inaugural I laid down the simple proposition that nobody is going to starve in this country. It seems to me to be equally plain that no business which depends for existence on paying less than living wages to its workers has any right to continue in this country. By “business” I mean the whole of commerce as well as the whole of industry; by workers I mean all workers, the white collar class as well as the men in overalls; and by living wages I mean more than a bare subsistence level-I mean the wages of decent living.”

There were flaws in the NIRA which led to its being declared unconstitutional because it was vague and vested too much power in the President but Roosevelt’s statement remains one that would be a valuable guide for those wishing to wean the country off Reaganomics once and for all.

That’s perhaps the most important battle in November 2018 and in 2020.